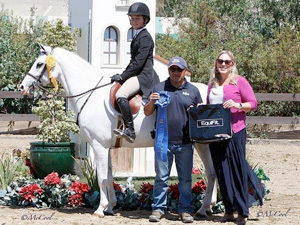 So many results for our riders and horses! Micaela Kennedy’s Elite Hollywood Smoke was ridden by Katalina Ricard to the overall third place ribbon in the Blenheim June Classic II $1500 USHJA Pony Hunter Derby, presented by Makoto Farms. More info on the class in this press release. Additional awards received by this duo who earned the top score in Round One with an 85, also included the Highest Placing Medium Pony Hunter Award and the Best Turned Out Pony Award. Willow Brook Stable’s Ramone Guzman was presented with the EquiFit Groom’s Award for his outstanding care of Elite Hollywood Smoke.