A trainer at the Lakeview Terrace-based Willowbrook Stables, Considine topped the field of 39 starters, riding for Hannah Goodson-Cutt, now studying t at Georgetown University. “I am so thankful to have such a great horse owner,” Considine said. “Not only did I have the pleasure to train Hannah throughout her entire junior career, I now have this wonderful horse to ride. This is a once-in-a-lifetime horse. I am truly blessed.” 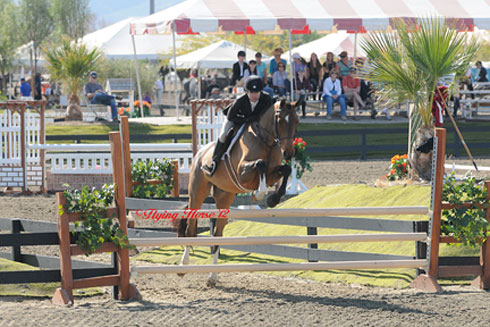 The class was the first of six desert circuit opportunities to qualify for the Diamond Mills $500,000 Hunter Prix Final scheduled to take place at HITS’ 2012 Championship Weekend, Sept. 7-9 at HITS on the Hudson in Saugerties, NY.

Course Designer John Manning of Shelburne, MA, set a unique track where exhibitors had to ride in two different rings. “In one ring the course was set like a traditional show hunter course. Then they had to jump into another ring where I set some more natural obstacles with long approaches,” he explained.

Considine and Caretano scored an 83.5 in the first round, which put them in fifth place heading into the round two, which featured the top 15. Their second-turn score of 87 brought their total of 170.5 to secure the blue. 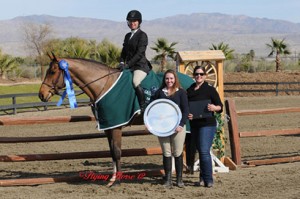 “I was honored to compete in a class with such great riders. My plan right now is to bring the horse to Saugerties and show in the big class in September,” Considine said. With Goodson-Cutt, Caretano was  champion at Devon and all four big East Coast indoor shows in 2011.

French sellerie Devoucoux is the title sponsor across the HITS circuits of each qualifying Hunter Prix leading up to the Diamond Mills $500,000 Hunter Prix Final. The Desert Circuit takes place at the HITS facility in Thermal, CA.

Reprinted with permission from The Equestrian News.