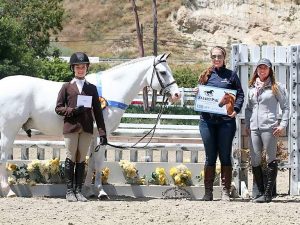 Tessa Buchanan and Rose Gold was all smiles in the winner’s circle while being presented the SmartPak Grand Children’s Pony Hunter Champion Award by SmartPak. They earned a total of 32 points including two wins over fences in the Small/Medium Division.

Congrats also to Stephanie, Ann and Harriet who all had great rounds in the AA’s!